Weddings aren’t just a joyous celebration of commitment in Bangladesh – they’re a national obsession. Last time I was at the salon getting my nails done (one of life’s little pleasures in the Desh) I forgot my book and wound up reading a Bengali trashy mag: every single article/fashion page/makeup tutorial, bar only two was about weddings, marriage, what to wear to your wedding, what to wear to a friend’s wedding, celebrity wedding photos, interviews with hot Bengali soap actors about when they planned to marry, ads for wedding jewellery…

And then there’re the ads on TV. Young, westernised women refuse to marry the man their parents have selected for them until they see the jewellery they could be wearing, and they swoon and capitulate. Whole villages dance in rapture when a bride appears with shiny white teeth. (Ok, I made up that last one – but it’s plausible). It’s estimated that people, including the rural extreme-poor, spent on average two years’ wages on a wedding. In the development sector, marriages are considered a significant ‘life shock’ causing major financial difficulty – right up there with serious illness, natural disaster and bereavement. The standards are lavish, and unavoidable. Like fish and rice, huge, glitzy weddings are a deeply ingrained part of Bengali culture.

A few weeks ago my friend Mahbub got married to (total babe) Fahima – in serious Bengali style. For a few of us bideshis, it was an amazing opportunity to throw ourselves into the colourful chaos that is the mutiple-day extravaganza. Bengali weddings normally primarily consist of three separate events: a Gaye Holud (generally held by the bride’s family – a bit of a hen’s/buck’s night extraordinaire of dancing, eating, music, and colour), the actual Wedding (usually a smaller gathering with family and closer friends, often held up to a week or two before the rest of the celebrations) and a Reception (a giant dinner party with so many guests there are often two dinner sittings). Mahbub and Fahima were kind enough to invite us to two of these amazing events – the Holud and Reception.

The Holud, which literally translates to ‘yellow on the body’ is a party where family and friends rub turmeric on the bride and groom’s faces to ‘cool them down’ (turmeric is considered a cool food), condition/moisturise their skin and make them ‘more beautiful’. It has the added bonus of being super fun.

Fahima is carried into the Holud in style

Everyone’s supposed to wear bright colours – yellow, orange or red – and let loose with a bit of all-out bollywood dancing. 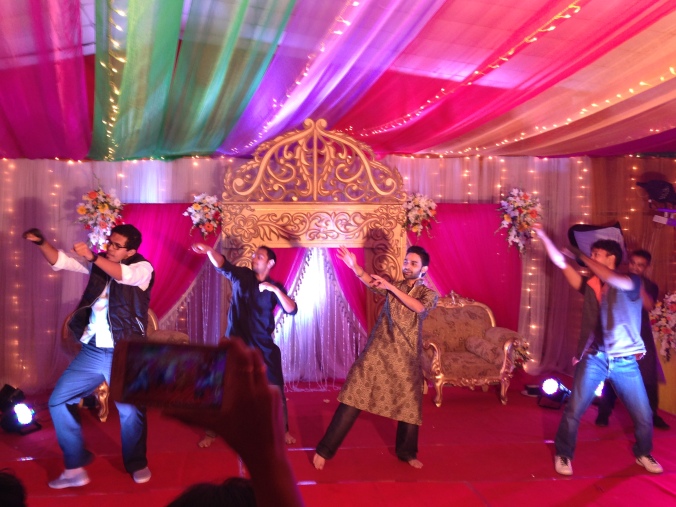 Mahbub’s cousins bust out the entertainment

Us enjoying the festivities in our yellow and orange

The Reception was a more serious affair – and understandably: Mahbub later told me that they had over 1,000 guests – and that it had been ‘small’ because the festivities were mid-week, so fewer people decided to come. Apparently there were about 800 at the Holud as well. 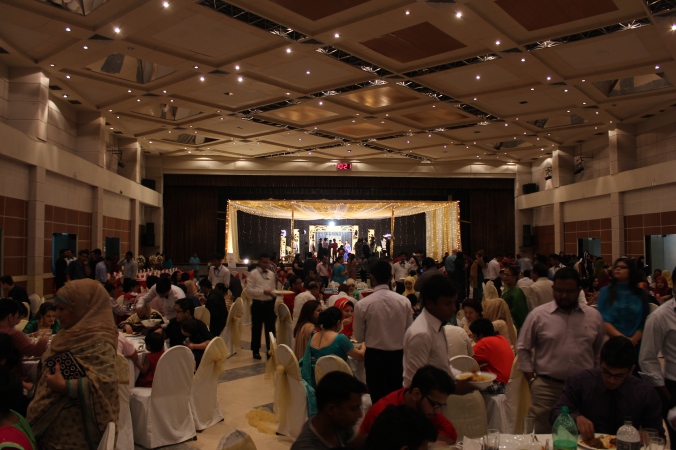 Dinner sitting #1: over 500 people eating dinner at the Reception before the next round

The dinner was delicious and I poked my head an my camera into the kitchens to take a picture of the industrious cooks, kitchen hands and waiters in a flurry of activity.

In the kitchen at the reception 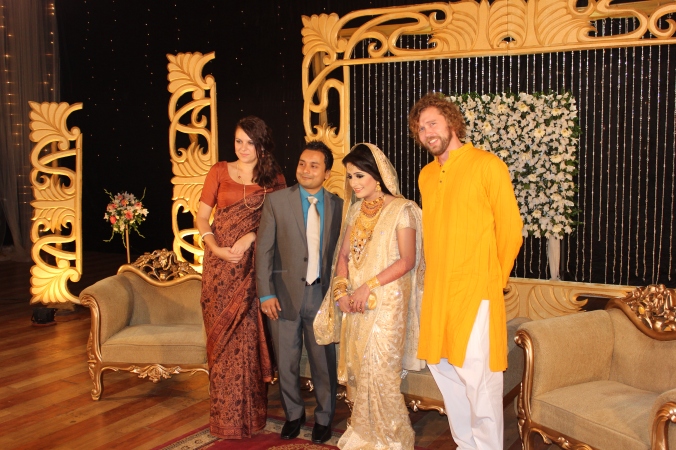 Posing with the happy couple at the reception

All in all it took months to organise and a small army of helpers to make it all happen. Now it’s done, Mahbub and Fahima are finally enjoying the down time together. A huge thanks to both of them and their families for their incredible hospitality and a great week of fun!